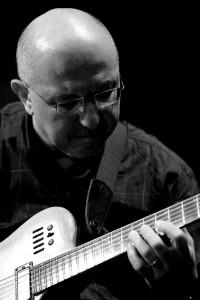 Önder Focan started music by playing mandolin at the age of 8. He switched to guitar at 15 and concentrated on jazz in 1975. Being mainly self- taught, he has become a jazz musician most sought after as a guitarist, player, composer arranger and lyrics writer. In 1986,  he got married to Zuhal Focan withn whom founded Nardis Jazz Club in 2002.

Focan improved his skills in music and teaching by attending seminars by IAJE (International Association for Jazz Musicians). From 1996 to 1999, he conducted Jazz Ensemble courses at the Istanbul Academy. In 1997, he performed in the Guitar Night that was organized by MIDEM (Marché International du Disque et de l’Edition Musicale) with 11 international guitarists representing Istanbul Culture and Arts Fund (IKSV).

Since 2002, he has been the art director of Nardis Jazz Club, where he organizes concerts for more than 315 musicians and accompanies them on stage every year. Some of these musicians are Benny Golson, Kurt Elling, Dianne Reeves, Al Foster, Dee Dee Bridgewater, Roy Haynes, Tierney Sutton, Kenny Drew Jr, Roseanne Vitro, Christian Mc Bride, Roy Hargrove, Ron Carter and majority of top local musicians.

He has released 13 CD’s. In 1998, featuring the great drummer Bill Stewart and Hammond B3 player Sam Yahel, his album

“Beneath The Stars” honored him as the first Turkish Jazz musician to have released an album on Blue Note label.
He has participated in 94 Festivals, while 43 have taken place in various cities in Turkey, the other 51 have been in other countries such as the USA (Los Angeles), France, Germany, China, Malta, Italy, Brazil, Senegal, Indiana, Finland, Australia, Jordan, Hungary, Switzerland, Croatia and Estonia.

“…. Önder Focan who proves to be an interesting guitar player with a very mellow tone as well as a cleverer than usual composers.”

“… I knew of course Önder Focan for some of his many musical enterprises but his Pera Trio (a reference to the historical Istanbul area) shows yet another facet of his personality, inspired by masters of jazz guitar from Jim Hall to Pat Metheny.”